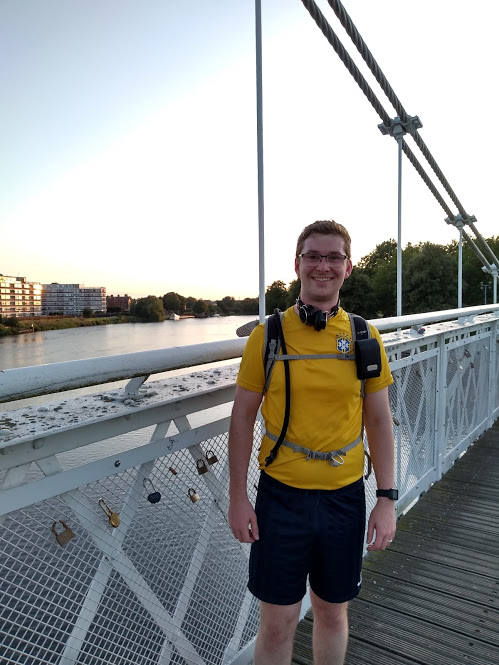 Hi I’m Gareth, a theology student at Spurgeon’s College who with the charity Dnipro Hope Mission (DHM) was able to visit Ukraine in early 2017, where I took part in and was deeply touched by their great humanitarian work. I’ve decided to run my first half marathon with insulin dependent diabetes, to raise funds and awareness of DHM’s efforts to help physically and emotionally care for those affected by the conflicts in Eastern Ukraine.

I’ll be running the Robin Hood half marathon in Nottingham on the 29th of September. Yes, that’s two weeks away, but I have been training for the past three months. This will be my first – and hardest – half marathon after being diagnosed as diabetic in late 2017. Once I had learned to live with diabetes, I figured it was about time to learn to exercise too, as I’ve been itching to run and rock climb. It hasn’t been easy and has required me to be flexible, altering my diet, insulin regimes, and quite often daily routine. It’s much harder to talk yourself out of a run when you’ve eaten enough sugar to send a child into hyper-drive.

So, why am I doing this?

In January 2017 I left the comforts of the UK, travelling to eastern Ukraine with DHM, where I experienced cold like I’ve never before or since at -20°C! Charity founders and close-friends Joshua and Varduyi prepared us well in the months prior, teaching us about Ukrainian culture alongside the humanitarian issues arising from the region’s conflict. Additionally, we were fundraising to purchase food and medicine, which we then helped local churches in eastern Ukraine to distribute to those internally displaced and separated from their homes and families. I was struck by the poverty of those who had lost so much, yet humbled by their warmth and optimism in such circumstances. The people I met made a lasting impression on me, their faith in God and humanity to act when all feels lost was profound; each person unique and sincere, with a hope for the future, despite their troubles and experiences. It certainly helped me to appreciate all I’m fortunate to have.

During my second year of studies I was diagnosed with Type 1 diabetes, completely changing my life, and making me reliant upon our fantastic NHS and its provision of insulin that I require to live. I had previously been healthy and active, but found difficulty in no longer being able to do things that I once could: it felt like something had been taken away from me. I started to struggle with my physical and mental health as well as my studies, and started to lose hope of still being able to live an active and healthy life. Through the support I found in God, my wife Rayssa, and many friends and family, I was able to regain some semblance of normality. Although, during some of my darker moments, I found myself drawing upon the examples of hope that my Ukrainian friends have shown in unimaginable circumstances.

A great contributor to me leading a healthy life is access to life-giving medicine and technologies provided by the NHS, yet with any humanitarian crisis, provision becomes stretched and at times insufficient. Sadly, this is the case in eastern Ukraine. Which is why I’ve decided to support DHM’s efforts to facilitate Ukrainian churches in supplying food and medicine to anyone directly affected by the conflict. My hope by running this half marathon is to help raise awareness of Dnipro Hope Mission’s efforts to care for those in need; raise funds via kind donations that ensure DHM can continue their wonderful work; and if I get a little healthier along the way that will be great too.

If you would like to donate, please do so on my campaign page, and again thank you.