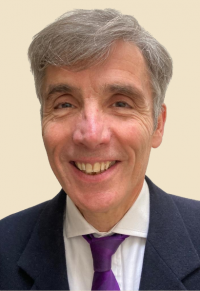 Following a recent health scare and an overwhelming burden of work and other pressures, especially since the Russian invasion of Ukraine in February 2022, I (Joshua) have sensed that the time had come for me to step down from the leadership and hand on responsibility to others. Therefore, after six years of leading the charity, I have decided to step down as Chair of Trustees in order to create space for new ideas to help the ministry to continue to flourish into the future.

I’m delighted to announce that at a recent trustees’ meeting, Mark Allchorn was appointed unanimously as DHM’s new Chair. Mark’s involvement with the ministry goes back to the very beginning when Mark was part of the first DHM mission team to visit Ukraine in February 2016. Since then, Mark has been involved in various ways in the ministry and in 2019 was appointed to the Board of Trustees.

Mark writes, “I am excited yet humbled to be taking on the role of Chair of Trustees for DHM at this pivotal time in Ukraine’s history. Joshua responded to the opportunities of partnering with churches and communities in Eastern Ukraine by founding DHM over six years ago. His strategic and compassionate leadership has strongly established the charity’s base of partners internationally. This foresight and God’s grace has seen DHM’s ministry go forward in exciting ways as the Covid pandemic and now the current war have drawn many across the globe to support the work of our partners on the ground in Ukraine. I am very much looking forward to working with fellow trustees, DHM’s International Advisory Board and our many partners in Ukraine as we together seek God’s leading for the future ministry of DHM. Above all, I pray that we can continue to bring God’s hope to the people of Ukraine and assist in supporting those who are most vulnerable now and into the future.”

I’m delighted to hand over the Chair role to Mark, whom I’ve come to know as trusted friend and a dedicated and skilled leader. He brings with him decades of senior management experience as well as a real passion for ministry and a deep love for Ukraine and its people. He is ideally placed to build on the foundations already established and to develop the ministry into the future in new and creative ways.

Mark is married to Amanda, a former Director of Communications for the Baptist Union of Great Britain. Mark and Amanda have two children and an ever-growing number of grandchildren. He is a keen cyclist and has helped to raise thousands of pounds for the ministry through his sponsored cycling endurance events.

Although I have stepped down from the Chair role, I remain on the DHM Board as a Trustee with responsibility for developing strategic partnerships with individuals and organisations in Ukraine that share our ethos and values.

Six years after its founding, I am very confident that DHM is in a strong position as a charity. Our ministry continues to grow and attract new supporters and volunteers. The impact that DHM is having on the ground in Ukraine is astounding and beyond anything that I ever imagined would be possible.

I am grateful to all our supporters, sponsor churches and donors. Your encouragement has been amazing and I know that we can count on you to support Mark and the other trustees as we continue our mission to make the Kingdom of God a visible reality in Ukraine through generous acts of compassion and solidarity with suffering people.