The Parable of the Good Samaritan – A Ukrainian Perspective 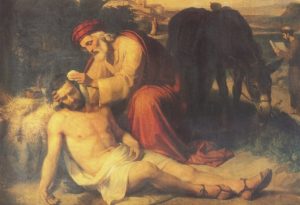 Our friend and ministry partner, Dr Roman Soloviy, who directs the Eastern European Institute of Theology, has written this powerful article, which uses a well-known story to reflect on the current plight of Ukraine. We republish the reflection here with Roman’s permission…

Ukraine today is a beaten traveller from the parable of the Good Samaritan (Luke 10). He became a victim of robbers who inflicted severe wounds, robbed him, and left him for dead. Russian murderers did this to us. They have killed thousands of sons and daughters of the Ukrainian people, plundered private houses and prosperous businesses, and carried away caravans of looted property from every city they left when the Ukrainian army drove them out. They tortured Ukrainians and left mass graves and Russian torture chambers behind in the liberated cities. They hoped we would die, as the thieves from Jesus’ parable had expected.

Surprisingly, Jesus’ pointed critical words are not directed at the thieves. Nothing else can come from them – the devil comes to steal, kill and destroy. He is still doing it.

The half-dead traveller was lying there on the side of the road. His lying there was as a challenge, as a stumbling block, as a reproach. His vulnerability, defenselessness, and helplessness became a test for the respectable and politically correct religious establishment. The priest and the Levite were thinking to themselves – we do not know why this bum is lying here, maybe he attacked someone and got a beating, or perhaps he beat himself or has a mental illness. Who knows? It is better to pretend that we did not see anything; this is not our concern; we stay out of politics; we’ll just pray for him in church. Prayer is the most important thing! It’s important not to judge, right? And they went on their way.

This story says nothing about the traveller, but it reveals the false piety of the religious leaders of that time, who were more concerned with their own peace of mind than with keeping the commandment of God. We have seen many such religious leaders during the nine months of the war. Those who pretended that they could not figure out who started the war, who was the victim, and who was the aggressor. Those who wrote – we will pray for you, but never became part of the answer to this prayer. Those for whom political correctness and long-standing friendship with the robbers were more important than a dying man on the side of the road (they asked the robbers – they replied that it was the traveller who attacked them and then inflicted the wounds on himself).

Ukraine is a mirror in which global Christianity, and the international evangelical community, in particular, can see their true selves. Many people would like to think of themselves as prophets of the Old Testament, Jesus of our days, or His apostles, although, in fact, they are but a Levite and a priest from the parable.

It is very difficult for Ukrainians; it is scary to suffer deep wounds, it is painful to die alone, and it is sad when those whose help and sympathy you counted on pass you by. But this is our destiny today – to become a touchstone for Christianity in the world. So that, having stumbled over our bloody body, Christian communities and their leaders see themselves through the eyes of God and get a chance to repent, perhaps the last opportunity to fix their lampstand before Him.

It is really hard for us, and we probably would have died in that ditch if not for the Good Samaritan. He did not pass us by. He still comes to us daily with humanitarian supplies, sincere prayers, food and medicine, care for refugees, and a prophetic voice against robbers.

Indeed the rescue of the traveller cost the Samaritan a lot – he got dirty with blood and dirt from the ditch, spent money and time, and had to adjust his travel schedule. Perhaps he was even late for an important meeting somewhere. God-fearing people thought him crazy. Why would he do it? – some asked. He does not know whom he is dealing with – others said. And what else can you expect from a Samaritan – said the other ones, those who are pious and devout.

Go and do the same – said Jesus.