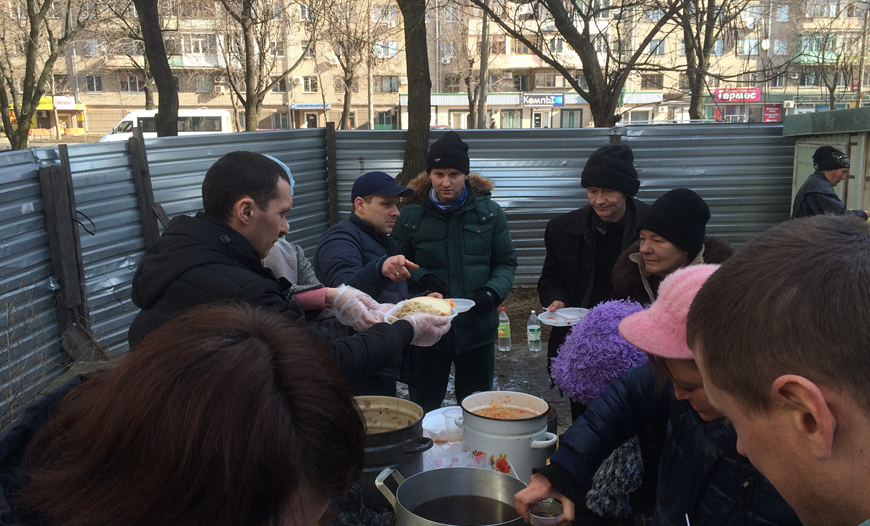 There were so many moving experiences and profound impressions that it is difficult to select which ones to mention in this brief report. Let me recount a couple of stories of those we were able to serve during our trip.

On our first day in Eastern Ukraine we met two street pastors, Yuri and Vasya, who are linked to the ‘School Without Walls’ initiative of Mission Eurasia. These two men have an incredible ministry to the homeless people of the city of Zaporizhe. Vasya was a drug dealer who was a well-known figure in the criminal underworld of Zaporizhe. He was himself addicted to drugs and was so ill that at one stage he weighed just 40kg. Looking at Vasya now, with his tall, sturdy frame it was almost incredible to hear that only about three years ago he was, in his words, ‘nothing but skin and bones’.

While he was recovering in a rehabilitation clinic, Vasya had an incredible encounter with Christ, who called him to reach out and rescue the homeless of Zaporizhe. After he had recovered, he began to preach the gospel in the clinic to other addicts.

One man in particular caught his attention. His name was Yuri. Vasya felt God saying to him that he was calling Yuri to Himself and that He wanted Yuri to serve the homeless community in Zaporizhe. Vasya befriended Yuri and persisted in ministering to him, despite Yuri’s rude rebuffs and refusal to listen. Eventually, Vasya’s patience was rewarded and Yuri, too, was claimed by Christ. Yuri told us how the decisive moment came while he was watching Mel Gibson’s Passion of the Christ. His wife, who was also addicted to drugs, was so impressed by Yuri’s transformation, that she too gave her life to Christ.

Ever since that moment, Yuri has pioneered an amazing ministry to the homeless people in the city. When we were invited to participate in one of the events organised by Yuri and Vasya in which we distributed food, clothing and Bibles to the homeless, we were amazed how these two men were able to communicate the gospel to the people in transformative yet simple ways that connected the gospel message of hope with the desperate circumstances in which these people found themselves – circumstances about which Yuri and Vasya knew all to well, since they had been there themselves.