Making the Kingdom of God a Visible Reality in Ukraine: The Vision of DHM 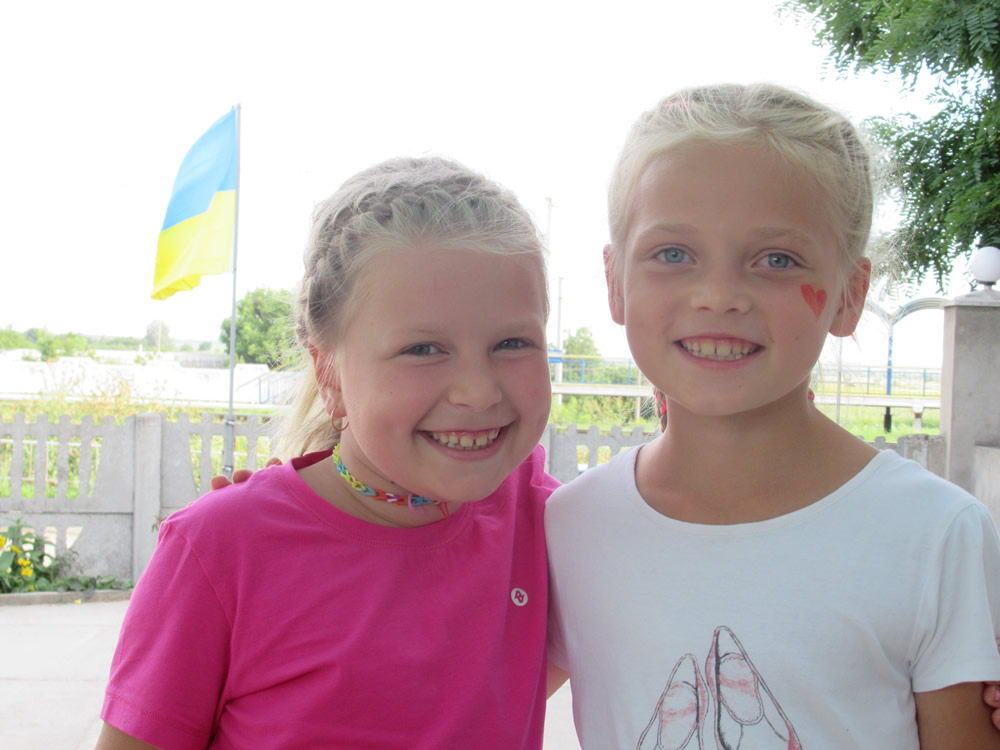 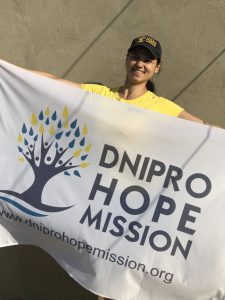 Have you ever seen a person in a desperate situation and not known what to do or how you could help? Perhaps you’ve seen a homeless person shivering with cold on the streets while other people just seem to pass by?

It was the middle of December in the Ukrainian city of Dnipro and the temperature was several degrees below zero. Walking down a busy street, I (Joshua) saw gangs of homeless men and women shivering in huddles in filthy porches of ugly derelict buildings, swigging vodka from a dirty glass bottle.

At the other end of the street, I could see young teenagers, clearly intoxicated,  wandering hopelessly and menacingly around the dark side alleys. Some of them were sniffing glue under the dubious cover of a tattered canvas. 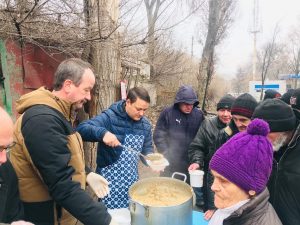 The next day, I visited a home for disabled people, where I saw human beings living in cramped, undignified, unhealthy conditions that were so appalling that we would have been ashamed to house a dangerous wild animal in such rooms.

While I was in Ukraine, I witnessed levels of poverty that I had scarcely even thought were possible. According to the United Nations, there are currently around 2.8 million people in Ukraine who are living with serious disabilities. Of these, about 60% live below the poverty line in degrading and dehumanising conditions. Abandoned by their families and ignored by the state, many disabled people in Ukraine suffer not only physical hardship, but also the indignity of having to live without human contact.

That was back in 2011, when I first visited Ukraine. Now the situation in Ukraine has become even worse. In 2015, Ukraine was invaded by the Russian army, resulting in the loss of tens of thousands of lives. As a result of the war, the infrastructure of healthcare and social support system in parts of Eastern Ukraine has virtually collapsed. 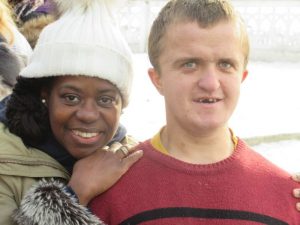 Thousands of people have been left without any support from the state, which cannot cope with the overwhelming extent of human need. As a result, many people, particularly the elderly and disabled, in the severe Ukrainian winter literally freeze to death every year in their own homes, simply because they cannot afford to pay their fuel bills, and they have no-one who gives them a second thought.

Yet amid the sad situation, I have seen green shoots of hope springing up in many surprising and unexpected places. I’ve witnessed heroic people doing what they could to help. These helpers were Christians who believed that God loves everyone and applied this practically by doing amazing things to alleviate suffering and to provide for those who had nothing. 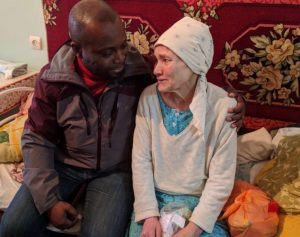 The quiet and unassuming manner in which ordinary people were doing the this work of the gospel with absolutely no thought of earthly reward made a lasting impression on me. There are people doing heroic work that goes completely unnoticed. We never hear about these people in the news or read about them in the papers, but these are the people who are building God’s Kingdom of compassion in Ukraine.

I am convinced that were it not for the presence of heroic yet ordinary Christians in this region, the whole of Eastern Ukraine would descend into complete chaos. I saw men and women of faith planting gospel seeds of faith, hope and compassion in the way that they serve their communities. It was a privilege to serve alongside these faithful servants and to learn from them about what it means to minister in Christ’s name to the poorest and most marginalised people – the people that the world has forgotten about, but who are especially close to God’s heart.

Aiming to respond to the suffering we witnessed in Eastern Ukraine and to empower these faithful Christian people in Ukraine, a group of friends came together to establish a new UK-based charity, Dnipro Hope Mission, in 2016. Since that time, our mission has developed as our relationships have deepened and expanded across several locations. 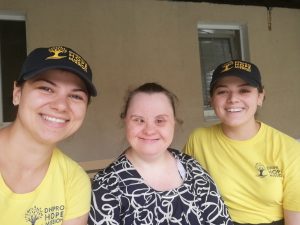 The mission is to support and empower local churches in Eastern Ukraine and empower local Christians by working in partnership with them to bring real, life-saving, life-enhancing, life-dignifying transformation to their communities. We work this way because it is through local and long-term relationships that trust is built and good lasting change is enabled. Our partners in the local communities in Eastern Ukraine know the people and their needs. By equipping local churches with whom were are in close relationship, we are able to limit administrative overhead expenses and ensure that the aid and financial support we give go directly to each partnership project. 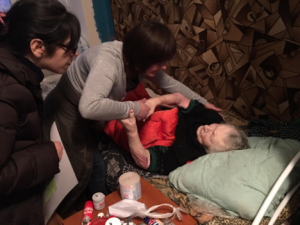 Our vision is to establish hubs throughout strategic locations in Ukraine in order to create networks and partnerships – both among Ukrainian churches and between UK and Ukrainian churches. Our main strategic priority in the coming years is to build community and a places of warmth (literally and metaphorically) and hospitality; to build communities in which people can congregate to pray and worship freely as a “church without walls”; and places where people can hear and learn about the Good News of Jesus Christ and receive unconditional respect and acceptance.

With a particular focus on people living with disabilities, our aim is to create safe spaces where disabled people are welcomed as equals and participate fully in the life of the community and live with dignity.

We see these community hubs, which we call “Houses of Hope”, as a Spirit-led, God-honouring way of expressing the gospel in the poverty-stricken, war-torn region of Eastern Ukraine. In everything we do, we strive to be true to the Christian  humanitarian values of compassion and hospitality because our Scripture shows that wherever God’s Spirit is at work, he brings restoration and reconciliation to life. 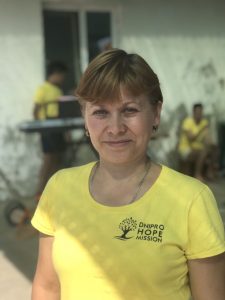 Our prayer is that we would play our part, responding to God’s love and testifying to the transforming power of the gospel by providing a prophetic and pastoral alternative way for living in Christian community, which stands in stark contrast to the neglect and dehumanising conditions of Ukrainian society, which continues to be cursed by the legacy of communism, even 30 years after the demise of the Soviet Union.

We have already seen God at work in Ukraine in powerful ways. We see the House of Hope as a concrete expression of this vision to see the work of God expressed in Ukraine by supporting grassroots initiatives by local Christians, according to the core values of DHM and the creation of a sustainable and strategic plan for the long-term mission of DHM in Eastern Ukraine.

This is where we need your help. In particular, we need churches to partner with us in helping to realise our vision of making the Kingdom of God a visible reality in Ukraine. By “partnership”, we don’t simply mean making donations or a one-sided donor-receiver relationship. Rather what we have in mind is the creation of relationships between churches in Ukraine and churches in the UK. 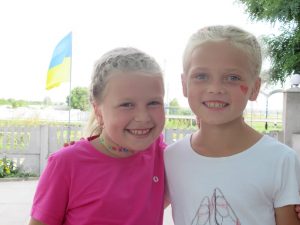 These relationships will involve churches in both countries giving to and receiving from each other. Churches in the UK can benefit from visits by pastors engaged in the ministry in Ukraine. The UK churches can expand their horizons and be inspired and encouraged by hearing first-hand about what God is doing in Ukraine. UK churches can also send teams to Ukraine on short-term mission in order to learn about the work that Ukrainian churches are doing to build God’s Kingdom in their local areas.

If you or your church would be interested in exploring the possibilities of partnering with a church in Ukraine, please get in touch with the Chair of Trustees, Joshua Searle. He can be contacted at [email protected]